Saturday, 25th July 1914  – the 5th Battalion Bedfordshire Regiment arrived in Ashridge Park for 15 days training. On the morning of Thursday, 30th July a hundred men from the Brigade received orders to leave the camp at short notice, their destination being unknown. Twenty-five men from the Battalion under Lieutenant Forrest, of Ampthill, were included in the number.

War arrives
At 6.16 p.m. on the evening of Tuesday, 4th August the Chief Constable of Bedford, Major Stevens,  received a telegram from the Under Secretary at the Home Office ordering instant mobilization of the Special Reserve and Territorials.

“His Majesty the King has been graciously pleased to direct by proclamation that the Army Reserve be called up on permanent service. All Regular Reservists are required to report themselves at one at their place of joining in accordance with the instructions on their identity certificates for the purpose of joining the Army.”

“All Special Reservists are required to report themselves on such date and at such place as them may be directed to attend  for the purpose of joining the Army. If they have not received any such directions or if they have changed their address since last attendance at drill or training, they will report themselves at once by letter to the Adjutant of their Unit or depot. The necessary instructions as to their joining will then be given.”

“His Majesty the King, having been graciously pleased to order by proclamation that directions be given by the Army Council for embodying the Territorial Force all men belonging to the said Force are required to report themselves immediately at their Headquarters.”

The military authorities at the Kempston Barracks and the Territorial Headquarters, who had been expecting the order all day, were immediately hard at work sending out notices to the men, and within a few hours a large proportion of Bedford’s able-bodied population were ready to take their place in the line of defence.

A large gang of men was busily engaged with constructing a huge platform in the Ballast Pits Siding near the Kempston-road junction of the Midland Railway, for the entrainment of soldiers and guns in readiness for five special trains to leave on the Saturday morning.

In Ampthill
On the morning of Wednesday, 5th August Bugler Harry King (5th Bedfords’) was ordered to sound the fall-in (click to listen) at the Drill Hall on Dunstable Street. About fifty Territorials of the Ampthill Company reported and then left for Headquarters at Bedford, in charge of Colour Sergeant Bunker. The Ampthill Town Band accompanied them to the station, and a large crowd gave them a hearty send-off, and all of the men went off in good spirits. Whilst the men were entraining the Band played “Auld Lang Syne.”

On arrival at Bedford the Ampthill Company, with those from Luton, Dunstable and Biggleswade, were accommodated at the Roise-street Schoolroom and the Goldington Council School where most of the furniture was turned out into the school yard to make space. By the evening the whole of the men, to the number of about 950, were in town.

200 hundred horses were entrained at Ampthill next morning.

In Ampthill four Boy Scouts were requested to report themselves to the Police Superintendent at 10 a.m. on Friday for messenger service. Four more at 2 p.m., and four more at 6 p.m. Those with bicycles to take them.

Writing in the Ampthill Parish News, the Rev Walter D. May said: 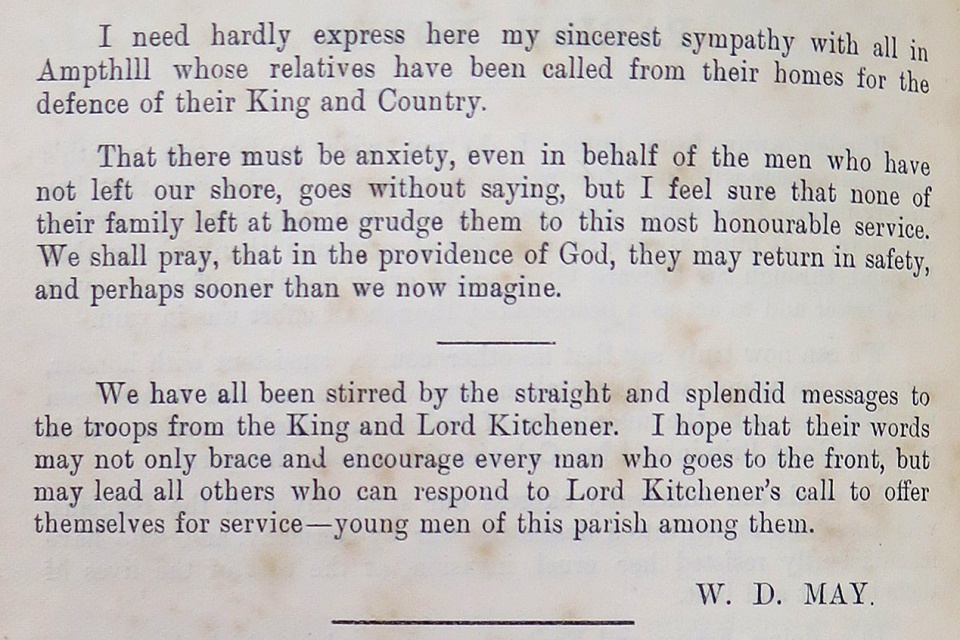 Horses
In the days to follow the roads and lanes of Bedfordshire echoed with the clop-clop of big country horses as they proceeded in strings to the seat of war. By mid-August the county was literally ransacked for equine. It was particularly hard on the baker or grocer, whose horse and trap is the sole means of conveyance to a wide circle of villages. In the extreme north of Bedfordshire, farmers, travelling drapers, and others to whom horses are very necessary were in considerable trepidation. One farmer took matters philosophically, and offered to sacrifice his old cockerel ‘if it was any use to the Government.’ 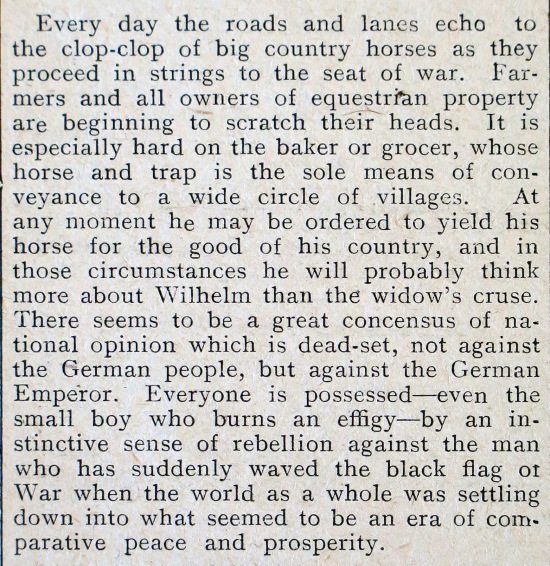 As part of Ampthill Armistice100 join us on 12th or 13th October for the WWI Living History Encampment in Ampthill Great Park.

Please email Stephen Hartley if you would like to know more about Ampthill Armistice100 or volunteer.
END_OF_DOCUMENT_TOKEN_TO_BE_REPLACED