November 1916 – the number of convalescent soldiers at the Camp has grown steadily. On Tuesday, 14th about 200 men arrived from the Shoreham-by-Sea Rest Camp. The Command Depot Band escorted the contingent through Ampthill. These men are at No.9 Command Depot to facilitate their recovery from injury and wounds. They will follow a programme of rehabilitation and retraining. Those men who regain physical fitness will be drafted back to resume service at the Front.

Sadly, Mr and Mrs F. Smith of Milton Bryan have received confirmation that their son Frederick has been killed. 17777 Lance Corporal F.W. Smith has been missing in action since October 12th. 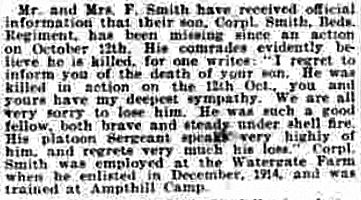 Actions in the The Somme region have been taking place since 1 July 1916 when the Allied Offensive opened – more. On November 18th the Allied scout parties discovered that German troops had withdrawn from their frontline positions. An expected quiet occupies the sector after weeks of attrition.

The Battles of The Somme have gravely affected the Ampthill Camp – we know that in the 141 day offensive 228 recruits have been killed in action or died of their wounds – more. This is one tenth of the 2,235 local volunteers who passed out of the Ampthill Camp upon completion of infantry soldier training.

This month 54 Ampthill recruits have been killed in action or died of wounds. Of these 37 men died on November 13th in an Allied operation with the Bedfords’ 4th Battalion by the North Bank of the River Ancre.

“The Battalion advanced with the remainder of the Brigade at 6.45 am and sustained heavy casualties among Officers and NCOs in and near the enemy front line from a strongpoint established between enemy front line and second line which had been passed over by the leading Brigades. Battalion advanced to enemy second line and from there parties pushed forward to Station Road and beyond. In the evening all available men were withdrawn and refitted.”

This 48 page book tells the story of how Tommy’s Footprints came about and notes the many people who have contributed and connected. There are just 150 individually numbered books. A unique Christmas gift.

£6 (inc p&p). Please email hartleyhare135@gmail.com to order by PayPal or BACS transfer. The book is also available from Ampthill Town Council, The Hub and The Stationery Boutique in Ampthill.