Ampthill ‘Great’ Park is a peaceful place that boasts tremendous views from the Greensands Ridge. The Great Park is best known for Katherine of Aragon who lived in Ampthill Castle (1532-3) for a time when Henry VIII was seeking a divorce.

Less is known, at least publicly, about the role that Ampthill Park played in WWI. In 1914 the 11th Duke of Bedford responded to Lord Kitchener’s call to arms by establishing the ‘Bedfordshire Training Depot.’ By August 1916 the Depot would train 2,235 infantry soldiers to fight with the Bedfordshire and other Regiments for ‘King and Country.’ A lone Memorial Cross stands proud in Ampthill Park to remember the soldiers who trained there, the horrific loss, and the ‘Ampthill Command Depot’ that treated 8369 wounded soldiers (1916-19). A hundred years on few signs of the Depot remain – spent brass cartridges rest in the leaf mould, faint initials scar the bark of a tree, and a slight depression is all that remains of a practice trench.

In 2008 Ian Church wrote an excellent little book ‘Walking in Tommy’s Footsteps’ to help fund the replacement of thirteen phosphor bronze plaques that were stolen from the Memorial Cross in the 1970’s. 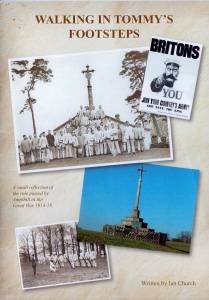 The book provides an insight into the role that Ampthill Park played in the Great War. Ian’s book and the Memorial Cross inspired me – the thought of soldiers training in the Park and marching to Ampthill Railway Station to face unimaginable horrors on the Western Front….

One hundred years on….

4th August 2014 was the centenary of the country entering into the Great War. In the
UK to mark this grim day

My wife and I had tickets to attend the War Horse Prom. It was a matter of chance really – one of Frances’ work colleagues was organising a BBC Prom trip and it happened to be the War Horse ‘special.’ This was a huge stroke of luck.

The Prom was splendid, cleverly crafted to tell the story of blissful British innocence, eager young men heeding the call, the grim reality they met… What struck me most was Gareth Malone’s Military Wives choir. Some of these brave souls silently carried army boots onto stage and laid a shroud over the pile to shape a corpse; a soulful rendition of ‘Home they brought her warrior dead’ (Gustav Holst, 1905) followed. Were these deadman’s boots? had the bearer lost their man in Iraq or Afghan? 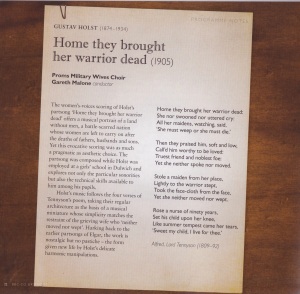 Monday, 4th August was a bright day. I was off work and, moved by the Prom, took a reflective walk to three of Ampthill’s War Memorials. The Cross in Ampthill Park records the names of 707 soldiers who died. I read the phosphor bronze plaques. 707 dead is roughly one third of the chaps who trained at the Depot – three times the national toll.

I headed to Coopers Hill where the War Memorial names 67 of Ampthill’s Fallen and onto St. Andrew’s Church to search for some of their graves.

Walking along the Alameda I pictured 707 soldiers in the hollow of Ampthill Park, drafting out. How long was the column? What would it look like? That night at LIGHTS OUT we lit a single candle and let it burn.

On Tuesday, 5th August an opportunity presented itself. Public interest in the Poppies was growing – I was heading into London and decided to visit The Tower. I walked briskly along the Embankment to be there for the break of dawn. All was still – red poppies spilled over the battlement to fill the moat as if with blood.

Tower of London – the Poppies at dawn

Such a powerful statement of Britain’s loss. Each death had affected a family, friends, a community. Walking to the office I thought again about the Bedfordshire Training Depot and then it struck me – maybe we could remember the 707 dead by marking a column of footprints in Ampthill Park, empty boots silent to the fore. The chalk-stencilled footprints would wash into the ground and disappear….. The idea bubbled and I resolved to speak with Cllr Mark Smith of Ampthill Town Council.

Ampthill Town Council welcomed the idea and established a working group to develop the project and drive it forwards. November 2016 will be poignant and special. 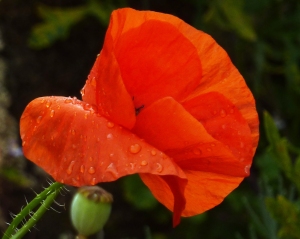 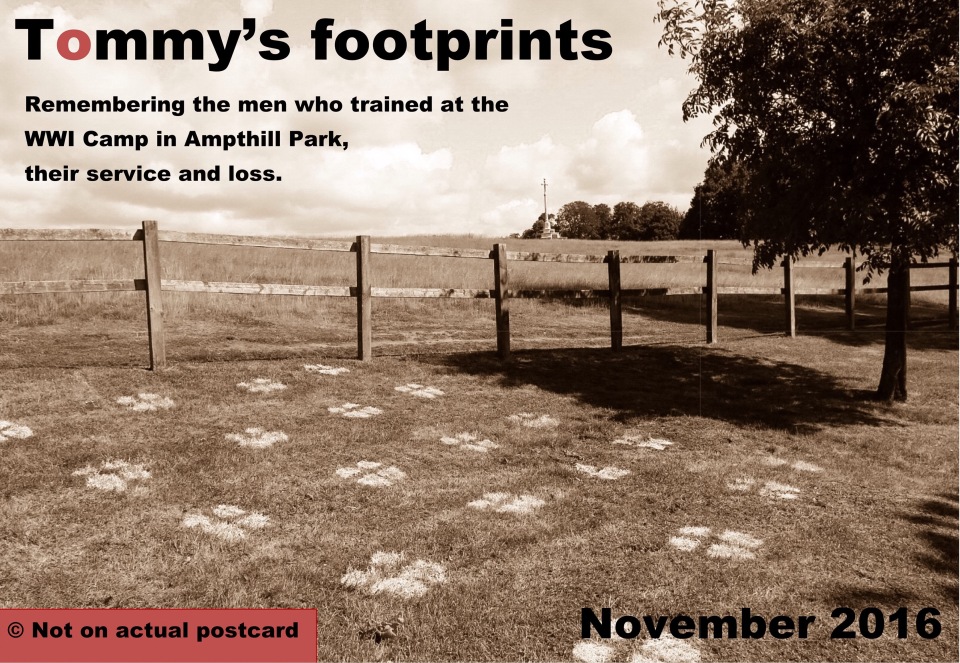